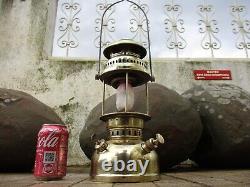 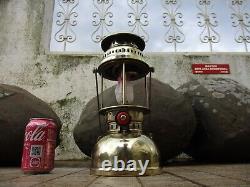 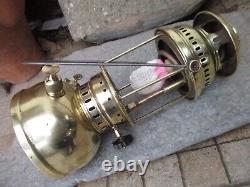 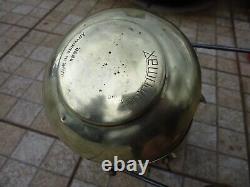 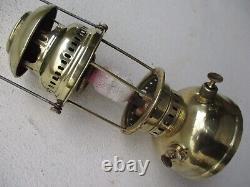 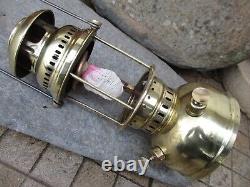 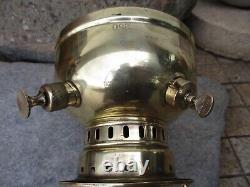 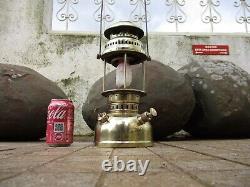 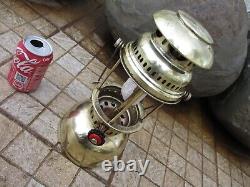 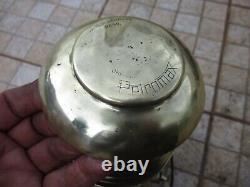 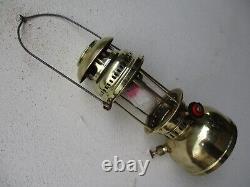 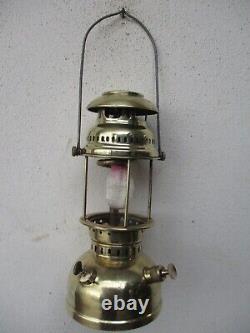 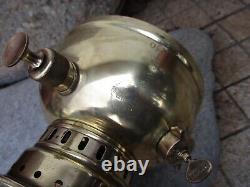 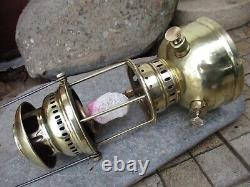 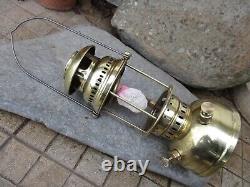 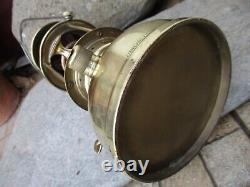 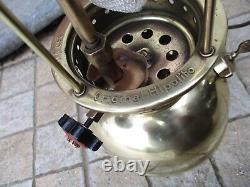 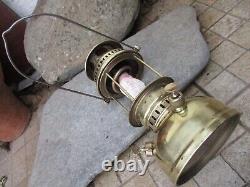 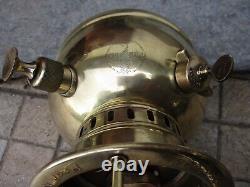 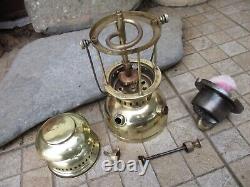 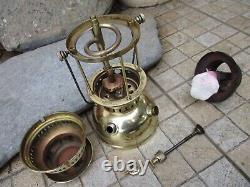 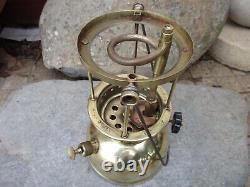 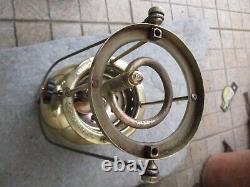 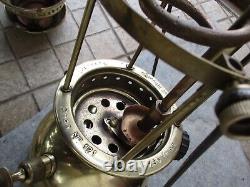 VINTAGE IN BRASS GOLD LAMP LANTERN PETROMAX - HIPOLITO 250 CP PRESSURE KEROSENE. Untested however i believe it is fully functional after a simple cleaning and overhaul.

In 1902, António Hipólito, young migrant from Portuguese City Alcobaça, arrived in Torres Vedras and established a metalwork company in an individual basis called The Industrial. Being a white foil tinker, this young man soon became aware of the opportunities offered to him in a rural countryside society in which viticulture stood out. By starting the production of acetylene lanterns, he rapidly expanded his business to the manufacture of tools which any farmer would consider of the utmost importance when performing their labour. This was the case of atomizers, wine presses, winery pumps, sulphating equipment and other devices. By attempting to bring together quality and affordable prices, particular attention to marketing strategies was given.

In order to make his products known he advertised in the Press and by participating in industrial exhibitions, he managed to make his production widely known. Thanks to this, he gradually gained reputation, both in the local and in the national market. Thanks to his performance as an entrepreneur, he was awarded The Ordem de Mérito Agrícola e Industrial Insignia in 1930. On account of health problems, in 1944, António Hipólito had to pass the company management to his descendants and son-in-law.

The company became a shareholder society and was named Casa Hipólito. At the time, stoves, lanterns, household equipment, were already produced in this plant. This same production would make the company well-known not only in Portugal but also overseas, where a great deal of its production was exported to. The peak of productivity was reached between the 50s and the 70s through the exclusivity of the production of the German brand Petromax and the widening of a range of gas products in a joint action with Cidla and later with Shell.

By building new facilities and employing hundreds of workmen, the company became the greatest enterprise in the municipality of Torres Vedras and one of the most important in its particular line in Portugal. In 1972, the company became an anonymous society of limited liability. However, in April 1974, the Portuguese Revolution and the political reforms brought about all the structural weaknesses from which the company had been suffering for some time.

We can mention some of them, such as the increasing self-financing inability, the obsolescence of machinery and manufactured goods. Also some difficulty in facing the wine sector competitiveness, feebleness and difficulty in replacing the family business management model by another, more suitable to the company In the 80s, the downward process increased. In 1987, the creditors enforced a regaining plan and the management regulation by court order.

From then on, a process of decay began and the company was forced into bankruptcy, in April 1999. In the end, only remained the recollections of those who had worked there for so long, a vast number of statements in the local press and also a documental spoil to the care of Leonel Trindade Museum in Torres Vedras. This paper now presented is the result of a research carried out on these information sources, bearing in mind the preservation of the social memory of Casa Hipólito, by describing its progress through almost one hundred years and registering some recollections of employees who worked there at the time.

Moreover, it is also the aim of this paper to propose concrete ways upon museological treatment, regarding heritage preservation. PLEASE LOOK MY OTHER PITROMAX LANTERNS OR COLLECTIBLES TOOLS. This item is in the category "Collectibles\Lamps, Lighting\Lamps".

The seller is "liciniogo40" and is located in this country: PT. This item can be shipped worldwide.